This half term we have looked at some well-known stories. Starting off with Goldilocks and The Three Bears, children used actions to help remember the story and the repeated phrases. As we are now beginning to make marks to represent our thinking, some children drew pictures as they talked about their favourite part of the story. Our role-play area reflected the book and we used the language of size to talk about the small, medium and large objects in the house.

Moving onto The Gingerbread Man, children helped us to write a list of ingredients that were needed to make our own biscuits. We were worried that a fox might try to get into nursery to eat the biscuits! After researching that foxes can jump and climb, children made a large wall to protect us from any fox invasions. Using chalk outside, children drew a picture of a large fox and a sign saying ‘No foxes in here’. Rainbow class children made their own biscuits to enjoy at home. Unfortunately, one biscuit had escaped and ran through nursery. This caused a lot of excitement! We are still looking for him now.

Due to the cold weather, we have had the chance to play outside in the snow and spotted ice everywhere. We even left numicon plates outside and water froze around them. We are encouraging children to become independent at getting ready to play outside. It is always tricky to learn how to fasten a zip on a coat, so we are working hard to help children master this skill.

Have a wonderful half term holiday. I hope the freezing temperatures start to improve!

We've had another very busy half term in Rainbow class. We started off the half term with a new topic, 'What's a box?'. We looked at the book 'Whatever Next!'. The children had the opportunity to re-tell this story using a range of props, and huge cardboard boxes! The children enjoyed climbing into these boxes and taking off to the moon! (We also had some really interesting other destinations!). You can see some of these pictures on Tapestry.

We then went on to the topic 'Christmas Sparkle', where we read the stories 'Stickman' and 'The Jolly Christmas Postman'. The children enjoyed collecting sticks and we used them in many interesting ways! We painted with them, compared length, bundled them together using both elastic bands and pipe cleaners, and tested them to see if they would float or sink. It was amazing just how much we could do with sticks! You can see some of these pictures on Tapestry.

After reading the story 'The Jolly Christmas Postman', the children wrote their own wish list to Santa. We also made Christmas cards for our family, and a salt dough tree decoration.

In the final week, we had our Christmas party, where we played a different game each day. Although this was different to previous years, the children had a lovely time. You can see videos of this on Tapestry.

We also practised some songs for our Christmas sing-a-long, and preformed this in the final week. I am sure that you will all agree that each child sang beautifully. You can see videos of this on Tapestry.

We wish you all a very Happy Christmas. We hope that you all stay safe, and that Santa brings you all you want. Lets all hope that 2021 is a better year!

We made poppies in Gold today.

A busy half term

It has been a lovely first half term in Rainbow class. All the children have settled in very well and seem to be adapting well to our routines. They have coped very well with all the extra hand washing!

We have spent the last 3 weeks looking at the topic of 'Autumn'. We began by looking at the changes in temperature outside, followed by the changes we could see with nature. The children did a fantastic job of collecting some 'Autumn Treasures' with their families. We all enjoyed looking in detail at what had been collected, and we had a  discussion about what we could see. The children were able to identify the many different coloured leaves, and that they were beginning to slowly fall from the trees.
We then moved onto looking at 'hedgehogs', the children learnt about what foods hedgehogs like to eat, sorting given foods into piles of 'hedgehogs eat' and 'hedgehogs don't eat'. On our creative table, the children added spikes to a hedgehog by dipping a fork in brown paint and printing. In our maths area, the children pegged the right amount of pegs onto each numbered hedgehog. We looked at the language of 'more' and 'a lot'.
In the final week, we looked at 'pumpkins'. The children enjoyed listening to the story 'We're going on a pumpkin hunt', where they joined in by adding various actions and sounds. The children also had the opportunity to make their own clay pumpkin, this involved the skill of rolling the clay into a ball and pinching the top to make a stalk. We also carved a pumpkin, discussed the texture, collected the seeds and then roasted them to taste.
We learnt a few Autumn songs along the way that we preformed as a class in the final week. The children did a fantastic job of learning these words and singing them with a sensible voice.
We hope that you have enjoyed looking at the various activities that we have posted to Tapestry. 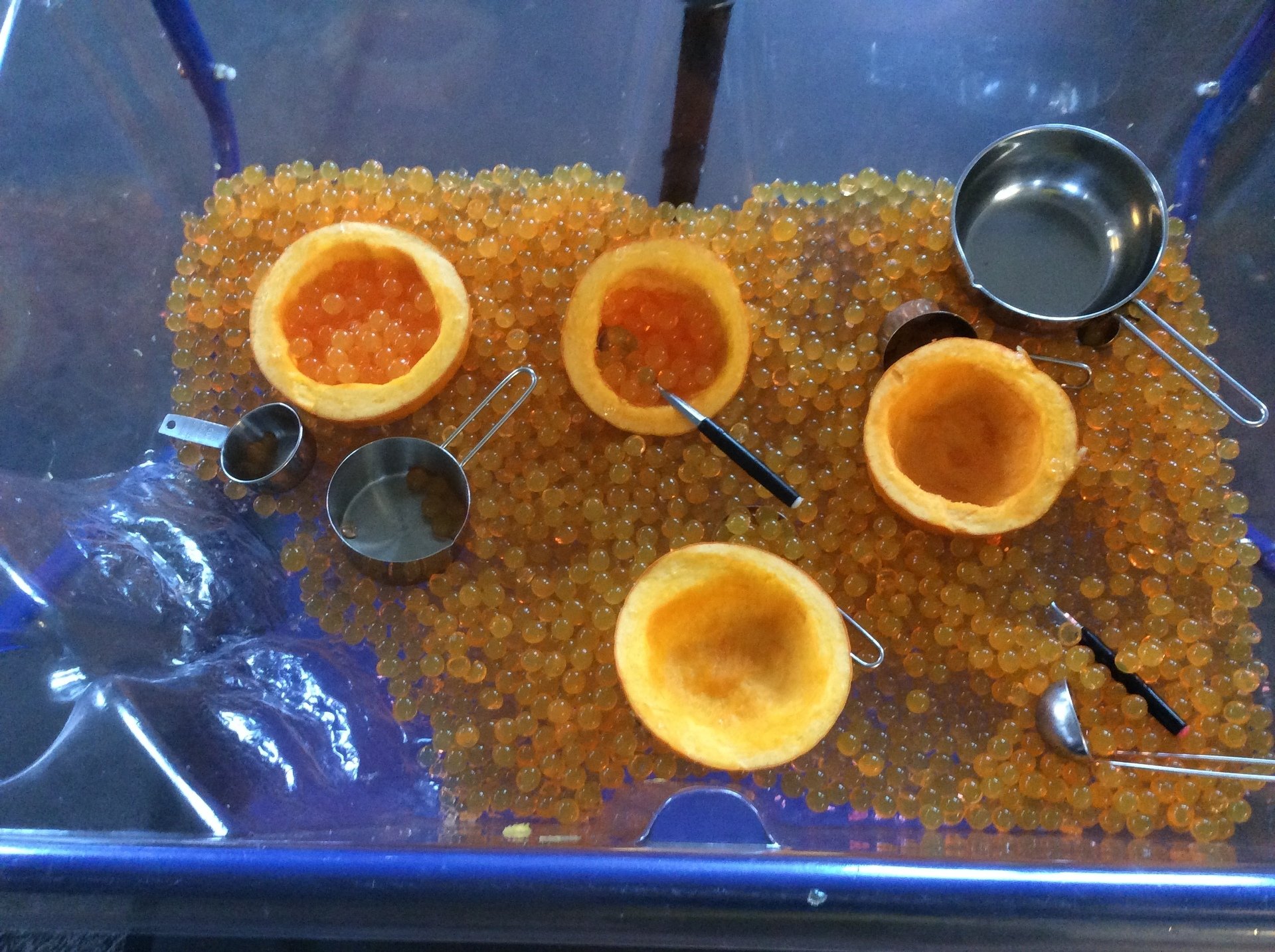